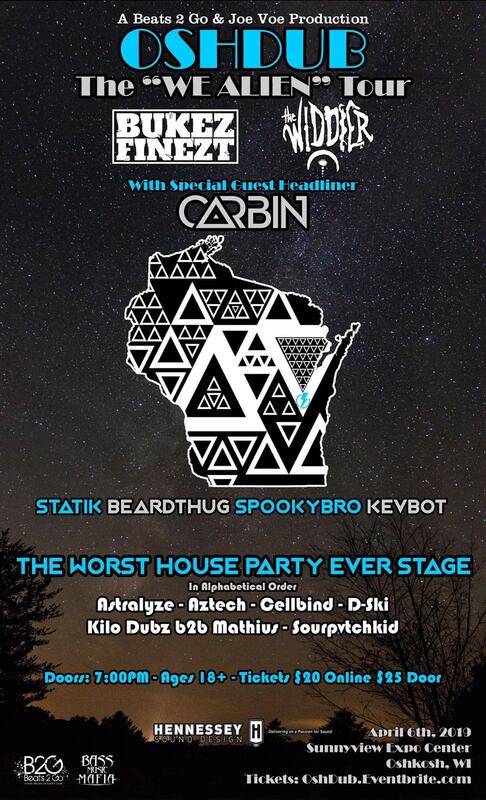 **Bukez Finezt**
Bukez Finezt from Cologne is one of Germanys most active and versatile Dubstep producers. His journey into music began in the mid 90´s.
To be precise he started producing in 1997. From Rap, Big Beat and Breakbeat into DNB toward 2000. 2006 was the year he started producing Dubstep.
"Dubout" a friend and local DJ from Bukez´s old hometown brought him into Dubstep. Influenced from DMZ, Kromestar, Pinch, Distance, Rusko, Caspa, Skream and few more he couldnt stop producing and playing out this music he´s in love with till today.
Over the years Bukez Finezt proved that he´s one of the top dogs in the scene. He shared the decks with artists and legends who invented and improved Dubstep, he headlined shows in many countries/cities and released tunes on a large range of labels.
Nowadays his tunes are getting support from some of the biggest
Names in the scene such as Mala, Kromestar, Hatcha, Joe Nice, Coki, Distance, Kahn, Vivek, 12th Planet and Rusko to name a few.
Bukez Finezt is the full package. From some silly basslines over deep vibes to Trap-beats. From "DUCK TRUMPET" over "UNDER CONTROL" to "PHAT BITCH" ...
...be prepared to experience a set packed with exclusives or classics from back in the days, grime straight outta UK or some of his own productions.
This man is a must see.
BUKEZ FINEZT AKA GERMANYS NEXT TOPWOBBLE!

**The Widdler**
Born in Tel Aviv and living in Austin, TX, The Widdler is widely recognized as an innovator and originator of dub sound. Constantly practicing, The Widdler incorporates mix sessions into his daily routine, which translates to his flawless performances at shows; headlining with the likes of Doctor P, Reso, Ajappai, Tipper, Bassnectar, Caspa, Mary Anne Hobbes, Excision, Bukez Finezt, Truth, Downlink, & many more as well as a member of US imprints Dank 'N' Dirty Dubz, MalLabel Music, Deep Dark & Dangerous, & Sub.mission. Taking influence from various genres of music and lifestyle, his tunes comes in all shapes and colors. From the chilled reggae dubs and blue mood atmospheres to the mean menacing throbs of bass and percussion, The Widdler knows how to weave his musical roots with his production that makes each set entirely special. Sit back, light a spliff, and enjoy the sounds of The Widdler


Special Guest Headliner **Carbin**
American producer McKenzie Morrow, known around the world as Carbin exploded onto the scene with a flurry of high quality releases, quickly gathering support from bass music legends such as Bassnectar, Snails, Datsik, Adventure Club and Excision. With a repertoire of original releases and official remixes under his belt and many more scheduled to be released in 2017, Carbin is sure to grace the bass music scene for years to come. YourEDM, Thissongslaps.com and many others support him – find out why!

**Statik**
Chicago-based musician and producer Statik has been making waves in the Midwest with his fresh and soulful sound.  He’s been gaining lots of recognition lately, opening for the likes of Artifakts, Branx, Borham Lee of Break Science, as well as All Good’s own GRiZ and Manic Focus.
Statik has found his unique sound by pairing his soulful guitar riffs with funky, heavy hitting bass lines and catchy synths.  His live sets are just as fresh as his music, and give him the opportunity to showcase his talents on the guitar.  He takes crowds through his catalogue of original music; all while seamlessly blending live instrumentation with a funky DJ set.


**Beardthug**
The brainchild of two passionate musicians, beardthug comes together to bend the preconceived notions of ‘genre’. Hailing from a broad spectrum of musical backgrounds, Seamus & Mallek bring the familiar festival bass sound to the table but always with an unmistakable vibe that could only be their own. Forming in Providence, RI in early 2016, beardthug’s supported shows nationwide for tastemakers like Caspa, Funtcase, Hatcha, Pretty Lights, Cookie Monsta, ill.Gates, Yheti, Tsuruda, GTA, Borgore, Flamingosis, and a butt load of others they can’t even fit into their bio. Their diversity in sound has landed them steady bookings at everything from bass festivals to brooklyn warehouse raves, as well as a track feature in Denon DJ’s newest MC7000 commercial. Their seemingly constant stream of releases seem to foreshadow the sincerity and passion for bass music these two guys can’t help but resonate on and off the stage.


**Spookybro**
Spookybro is a ghost/producer/dj from Appleton, Wisconsin. Spooky makes loud, haunting bass music, and specializes in his eclectic sets that cover all styles with no restrictions. Why you ask? Because ghosts like to party!


Please direct all questions to Beats 2 Go LLC or Jordan Wilcox
All sales are final. Tickets may be subject to per ticket fees, order processing fees, and additional taxes.